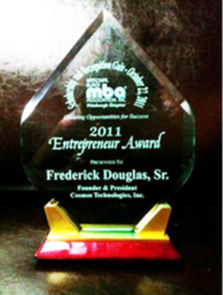 2013 Small Business & Entrepreneurism Subcommittee Chairperson: President Frederick Douglas has been selected as Chairperson for this subcommittee for the Mayor-Elect Bill Peduto Transition Committee.
​
2013 Pittsburgh Circle of Courage Award, Pittsburgh, PA: Frederick Douglas was honored as a person of Faith and Courage by BCC Ministries for the work the Cosmos Technologies has accomplished. BCC Ministries is involved in and supports education, healthcare, distribution of food and clothing to the poor locally and across the globe.
​
2011 50 Men of Excellence, Pittsburgh, PA: Frederick Douglas was recognized by the Allegheny County Council as one of the New Pittsburgh Courier’s 50 Men of Excellence for contributions in the community. The New Pittsburgh Courier is one of the oldest and most prestigious Black newspapers in the United States. The County of Allegheny is second most populous county in Pennsylvania. The Office of the County Council represents the constituents in this territory.
​
2011 Impact Award, Pittsburgh PA: Cosmos Technologies, Inc. was awarded the Impact Award from Bridgeway Capital for its dedication to small business growth, creating jobs, and making western PA a thriving region for all. Bridgeway Capital is a major institution in western PA which works to increase financing for small businesses, provide training and improve awareness of economic growth with a mission to revitalize western PA.
​
2011 Entrepreneur Award, Pittsburgh PA: Cosmos Technologies, Inc. was awarded the Entrepreneur Award by the National Black MBA Association Inc, Pittsburgh Chapter, an organization dedicated to creating and promoting opportunities for African Americans in education, business and technological innovation.
​
2008 Minority Business of the Year Award, Pittsburgh PA: Cosmos Technologies Inc. won the 2008 Minority Business of the Year Award, presented by the Minority Business Opportunity Committee (MBOC). MBOC is a national organization that serves as a focal point for developing partnerships with city, county, state and federal government as well as public and private sectors to ensure economic development opportunities for women, minorities, and veterans.
​
2008 Pittsburgh Courier Article, Pittsburgh PA: Cosmos was featured in the Pittsburgh Courier newspaper on January 22, 2008. The article highlighted Cosmos’ impact on growing employment within the City of Pittsburgh.